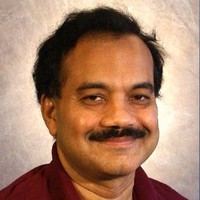 Bapi Surampudi has more than 20 years of experience in the powertrain controls industry and 10 years of experience with electric vehicles and various forms of lithium ion batteries. In addition to the 24 years on the staff of Southwest Research Institute (SwRI), he worked at Caterpillar, Combat Vehicle Research and Development in India and Tata consulting Engineers in India. His role at SwRI has been to build control systems for engines, transmissions, hybrid vehicles and autonomous vehicles. He has also provided leadership for the SwRI battery consortium for the last eight years. He currently serves as a staff engineer for powertrain development at SwRI. His academic background includes a PhD from Texas A&M, MTech from IIT Madras India and BS from REC Surathkal in India. He is a senior member of IEEE and a member of SAE. He holds 10 patents and has published frequently in peer reviewed journals and conferences. He has received several best paper presentation awards in SAE and other battery related conferences. He has been an adjunct faculty for the MEES program since 2011.