Fuel economy has substantially improved over the past two decades. The introduction of advanced combustion strategies and hybrids helps to continue the positive trend. 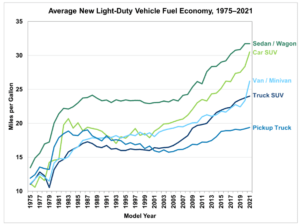 From 1975 to the mid-1980s, vehicles experienced a sharp increase in fuel economy, due to the oil crisis. This was then followed by a period where the average fuel economy among vehicle classes remained relatively flat as fuel prices stabilized.

Beginning around 2000, with added interest in emissions and efficiency, fuel economies began to rise again. While all vehicle classes have experienced impressive gains in fuel economy over the past two decades, the SUV class  has seen a 70% improvement since 2000. The sharp increase in the van/minivan class in the last few years is likely due to the introduction of hybrid and plug-in hybrid models.

Read the full article at: https://www.energy.gov/eere/vehicles/articles/fotw-1237-may-9-2022-fuel-economy-all-vehicle-classes-has-improved